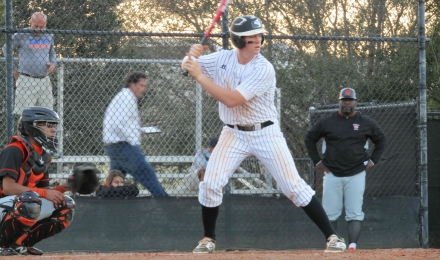 Jonathan Levin looks for his pitch.

Thursday saw a high-scoring game between visiting Winter Park and Olympia, with a final score of 15-10 in favor of the host Titans. It was truly an offensive showcase, with the Wildcats tallying 12 hits and the Titans tallying 11 hits. Both clubs scored five runs in the sixth inning to finish off the game, which was called before the start of the seventh due to the creeping darkness.

By far the standout of the evening was Jonathan Levin, who hit a rare grand slam in the bottom of the fourth. The ball sailed over the left field fence, and Olympia’s dugout emptied to meet Levin at home plate. That wasn’t all, as he finished the game 4-for-4, beating out two hits that didn’t leave the infield. In fact, during the sixth inning he beat out an infield hit and scored the go-ahead run when Francis Villamin knocked a triple in the very next at-bat. As he came around to score the Olympia crowd and dugout erupted in excitement.

On the Winter Park side there were a few offensive standouts. Jason Heard finished the game with three RBIs, going 1-for-3 during the meeting. In the first inning he beat out a throw at first on an error, scoring a run in the process, and in the wild sixth inning he drove in two runs off a clutch single. Also, star center fielder Elijah Cabell went 2-for-4 with a single and a sixth-inning RBI double.

In the end it was Winter Park’s ability to take advantage of momentum that allowed them to keep creeping back into the game. In fact, by the end of the third inning the score was a close 6-5 in favor of the Titans (4-1), before they pulled away with a four-run fourth inning to break things back open. 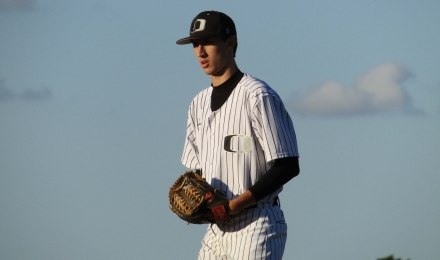 Aaron Bogovic pauses before throwing the next pitch.

Olympia relief pitcher Aaron Bogovic came in to shut down the Wildcats in the top of the fourth inning, which was something that Schall was particularly proud of.

“I’m proud of the way our relief guy came in after our starter came out. He came in and did a good job for us for two innings,” Schall said. “These guys don’t quit. I like the way we’re swinging it right now. It’s a good thing we’re swinging it.”

Schall also noted how important Levin’s grand slam turned out to be, especially when the Wildcats rallied for five runs that tied the game in the top of the sixth. Winter Park got consecutive singles from Marc Stephenson, Wade Cuda, Elijiah Cabell and Jaison Heard, and then Freddy Torres reached on an error and suddenly three runs were in. Angel Fernandez had a sac-fly to drive in Heard and Torres tied it up when Rody Webb singled to right field.

Torres and Cabell both finished 2-for-4 with two runs.