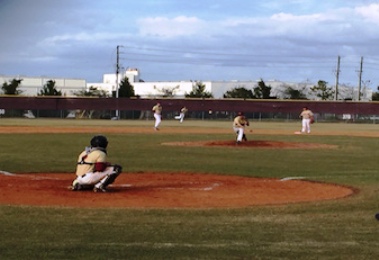 Brendan Greenwood struck out three and got the win against Cypress Creek.

On a sunny Monday afternoon in Orlando, the Wekiva Mustangs hosted the Cypress Creek Bears in a non-district showdown. In a game that featured little offense, the Mustangs were able to hold onto a 2-1 victory thanks in part to two first-inning runs and a dominant mound performance by committee.

The Mustangs (2-5) maintained a dominant mound presence due largely in part to the relief efforts of winning pitcher Brendan Greenwood. Greenwood came in and finished the second inning after starter Jason Cranmer found himself in a jam early and often against the Bears offense.

Greenwood had all his pitches working well for him, striking out three and walking nobody through four-and-a-third innings. A crafty right-handed pitcher, Greenwood claimed his success came as a result of just being focused.

“I had everything going for me today,” Greenwood said. “When I focused on what I wanted to do on the mound, I was able to get it done today.”

For the Bears (2-5), it was unfortunate to take the loss. Besides two runs in the first inning, starting pitcher Alec Pascale was lights out in his first away appearance of the season. Pascale threw a complete game for his team, walking two and striking out eight. His curveball took an inning to locate, but after a two-run first, Pascale flat-out dominated the Mustangs.

The game really plateaued from the second inning until the last out in the seventh. Showing little action other than Pascale’s strikeouts, the game finally resurrected in the bottom of the seventh when Cypress Creek leadoff hitter Eli Candelaria doubled to straight-away center field with two outs. It was the first spark of offense the Bears had seen in a few innings and also proved that Wekiva closer Anton Wynn was, in fact, hittable after striking out the first two batters of the seventh inning. 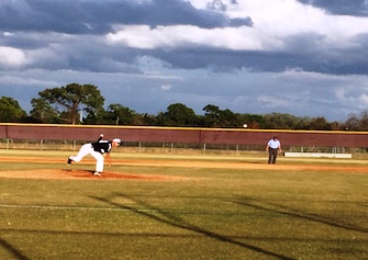 When the second man in the lineup was hit by a pitch the baseball game became exponentially more enticing. When first baseman Jason Figueroa stepped into the plate for the Bears, the away fans went crazy. They knew if they were to have a chance at a comeback, this was the man they wanted at the plate. Figueroa ended up hitting a hard come-back to Wynn, which he snagged with a great glove save before throwing Figueroa out at first to end the game.

Wekiva manager Jason Sanders was proud his boys were able to survive the late-inning drama at home.

“Any time we get a chance to play a great game that comes down to the wire, we are confident in our guys to maintain the lead,” Sanders said. “It’s the best challenge we can ask for, to play a close game. I’m just happy we won and got to put ourselves in a position to continue winning this week.”

“Besides the first inning, we won 1-0 today,” said Kovacevich. “We had a sloppy first and paid the price for it. You can’t win them all, but Alec pitched a gem of a game. I wish we could’ve helped him out a bit more.”

This week, Wekiva gets underway with the Olympia Titans in a home-and-away series beginning Wednesday. Cypress Creek travels to Lake Nona and plays next on Friday.