Freedom Walks Off In Eighth Inning On Dr. Phillips 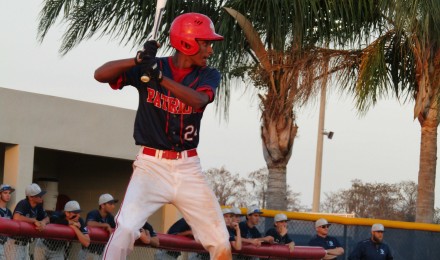 Late-game dramatics are always exciting, and Friday night’s matchup between the Freedom Patriots and Dr. Phillips Panthers had plenty of it. The Patriots came out on top, winning in extra innings by a score of 7-6.

The Patriots (5-7) first started showing signs of a comeback directly after the Panther’s had a break-through sixth inning.

“We don’t give up,” Patriots manager David Wheeler said. “You know we lost a couple of guys to injury. We’ve got some guys that are younger. My seven, eight, and nine hitters are sophomores. I’ve only got two seniors on the field. We just come to battle.”

Led by senior J.P. Pesi, the Patriots manufactured a run in the bottom of the sixth, and tallied three hits. After the top of the seventh went scoreless, Freedom went right back to work.

Kemil Milanes opened up the inning with a double. Brandon Madero laced a single. Austin Davis came up and hit another single, knocking in a run, and then Pesi came to bat. Tension filled the air as noise from the Freedom crowd rose louder and louder. Sure enough, Pesi came through with a single to knock in another run.

Then something remarkable happened. Wheeler put in a pinch-runner for Pesi, before going back to re-enter him onto the basepaths a couple pitches later. It seemed odd, but before the pitcher could throw one more pitch, Pesi left first base early, and the runner on third base took off for home.

“It’s called an early-break,” Wheeler said. “We practice that, believe it or not. Pesi, he’s a senior, he’s the guy that runs it the best. I knew if we had two strikes on that hitter he was going to do it. He knows the read, the bites good. You have got to have somebody fast at third, and I had one of my fastest guys at third, so I knew it was going to work if we had the opportunity to run it.”

The runner on third was Austin Davis, and he crossed the plate standing up to score the tying run.

“I’ve been playing with him for a long time; I have got to know his strategies,” Pesi said after the game. “Basically I got on base, he gave me the nod, and I already knew what was going on. We’ve ran it a couple times in the years I’ve been here.”

The momentum of the whole game shifted in that moment, and the Patriots held the Panthers scoreless in the top of the eighth, before coming up in the bottom of the eighth to win the game. Kemil Milanes came up to the plate with runners on first and second, and it seemed like the game was going to be over in a matter of seconds. 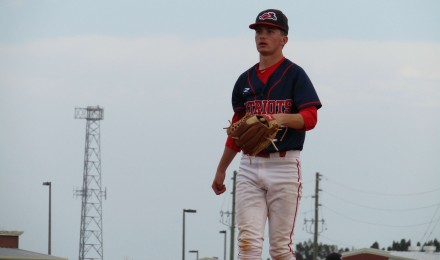 “A lot of adrenaline kicked in and I didn’t think about anything,” Milanes said. “But before, on deck, the pressure was insane.”

When Milanes made contact with the ball, it was a certainty that the game was over. The ball sailed over the center fielders head, driving in the winning run.

The last few innings of the game were an offensive showcase, after the first four innings were tight. By the end of the fourth, the score was locked at 2-1 in favor of Dr. Phillips. Both starting pitchers performed well. Justin Driscoll got the start for Freedom, while Christopher Moore got the start for the Panthers.

Justin Driscoll got out of some initial trouble in the second inning with men on second and third. With one out, Driscoll struck out two straight batters and got out of the inning relatively unscathed, letting up just one run. He continued to pitch into the top of the sixth inning, where he exited after recording one out.

“He’s a junior,” said Wheeler. “He battles every time out there. This is his second year, and he’s been on the varsity rotation and goes out for five or six innings every game and battles.”

On the other side, Christopher Moore came into the seventh inning having given up just two runs. It was a masterful performance on his part, and he exited after recording two outs in the bottom of the seventh.

Offensively, the Panthers’ bats roared to life in the top of the sixth inning, with Ricky Hidalgo and Brice Schiano knocking in three of the team’s four sixth-inning runs. They managed to put six runs up on the board for the game.