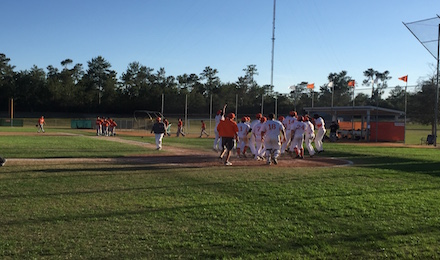 Nathan Peden is mobbed at home after getting the winning hit.

A crazy game Tuesday afternoon in Orange City between Orlando’s #3 University Titans and 9A-2 rival Seminole turned to survival mode as University rallied late to beat the Seminoles 7-6 in extra innings.

Titans shortstop Michael Harkcom came on to pitch in the eighth inning to secure the tie and eventually was credited with the win. Harkcom was dominant in one inning on the mound, going three-up, three-down and striking out two Seminoles hitters.

The Titans were eager and ready to break the tie and finish the game. Seminoles center fielder Chris Rodriguez was tagged with the loss after a walk-off home run by third baseman Nathan Peden in the bottom of the first extra inning of play. With one out in the bottom of the eighth, Peden hit a one-strike curveball just over the fence sneaking inside the left field foul pole.

“It’s the greatest feeling in the world. I feel amazing right now and I’m proud to play on this team,” Peden said while celebrating following the victory.

Seminoles starting pitcher Freddy Albaladejo was on fire early. Albaladejo allowed two runs through the first four innings of play. After an early run given up in the bottom of the first, Albaladejo cruised in the second and third frames. Following another run in the fourth, Albaladejo pitched out the rest of the half-inning unscathed. 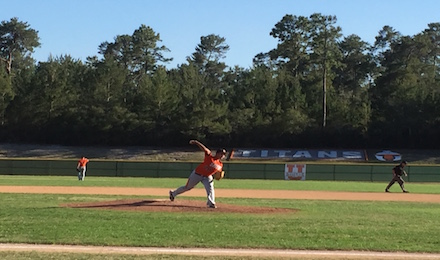 Freddy Albalaedejo struck out eight and walked none in his outing Tuesday.

In the bottom of the sixth, Albaladejo found himself in a tight spot. Having given up a lead-off single to Titans first baseman Logan Allen, the wind started blowing out to left field. University catcher Jacob Molle took strike one before unloading everything he had into a soaring two-run bomb to cut the lead down to two.

Two walks later and Albaladejo’s day was done. Jack Hope came in and finished the inning off, keeping the lead at 6-4. Unfortunately the bottom of the seventh was the same thing all over again. A lead-off single by Molle, brought up Harkcom. Harkcom knew what needed to be done and delivered big for his team. The first pitch he saw he took it deep and it was gone. The game was tied at 6-6 and was heading to extra innings.

“I knew my team needed me and I had to come through for them,” Harkcom said. “I felt good on the mound. I was pumped Coach let me come in and shut it down in the eighth. Great win, and I’m glad we’re still winning.”

Titans manager Frank Martello was nervous for his team Tuesday.

“Yeah, we just didn’t play that good early,” Martello explained. “It took us awhile to get settled on the mound. All the credit goes to their starter today. We got good opportunities late and didn’t fail to capitalize. That’s what good teams do and we got it done today.”

Seminoles star Matt Allan was the designated hitter all day had three RBI’s on a 2-for-3 day at the plate.

“We just didn’t get it done today,” Seminoles manager Derek Wolfe said. “We had it and lost it. We played well for five innings of ball and it’s unfortunate we let it get away from us.”