Ridge Pitches Its Way Past Gateway In 3-1 Victory

The Ridge Community Bolts won a tight and close 3-1 pitching battle on the road against 9A-5 rival the Gateway Panthers on a Friday night cold front that hit the Orlando area. The Bolts got to the field late due to heavy traffic and were forced through a quicker warm up routine and paid the price.

The Ridge bats were silent in the top of the first. They turned the offense over to Gateway and the Panthers (4-3, 0-2) were ready to draw first blood. Leadoff batter, second baseman, Jose Montoyo, hit an infield single before the shortstop threw the ball over the first baseman’s head and out of play advancing Montoyo to second base. A ground out to second base and a sacrifice fly brought in Montoyo for the first run of the game.

Ridge starting pitcher Andrew Baker wasn’t discouraged after a shaky first inning. Baker is fully committed to the University of Florida already and has some major league teams that were in attendance Friday scouting his potential. The athletic, left-hander was averaging around 88 miles per hour on his fastball and topped off at 91 in the fourth inning.

“I knew since we were running late that I wasn’t going to get fully warmed up,” Baker said. “After that first inning and after I got a chance to bat, I was ready to go. I felt really good to start the second and just kept that up from then on.”

Baker went the full seven innings on the mound for the Bolts, finishing his electrifying night with 11 strikeouts, no walks, and only four hits.

On the other side, Gateway starting pitcher, Victor Gotay, was just as impressive himself. Gotay went five and two-third innings for the Panthers before handing the ball over to Andres Rodriguez to get out of a jam and end the sixth inning.

In the fourth inning, the Bolts (6-4, 2-1) finally got to Gotay after a leadoff walk to shortstop Marcus Judd, followed up with a single by second baseman Melvis Salcedo. Brenden Frese then laid down a perfectly-executed bunt that loaded up the bases. After first baseman L.J. Irizarry hit a sacrifice fly to center field and tied the ball game, the momentum seemed to all lean in the Bolts’ favor. 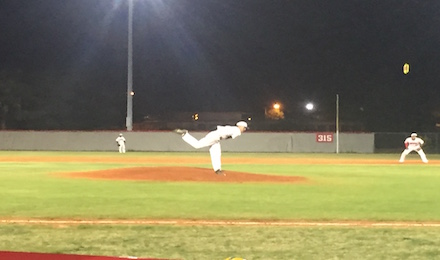 Victor Gotay held up his side of the bargain with two pivotal strikeouts with bases loaded.

But after a mound visit from Gateway manager Jim Moran, Gotay intentionally walked catcher Berto Meija, then struck out the next two batters to end the inning. The score after four innings was one run apiece.

Unfortunately for the Panthers, Andrew Baker was on the mound and in the groove. Panthers right fielder, Emile Perez, was the only left-handed batter in the Gateway lineup Friday night. Batting sixth, he faced Baker three times. Although he failed to get on base in the game, Perez had a tremendous second at bat in the fifth inning. A 12-pitch at bat that ultimately lead to a swinging strikeout, Perez had the toughest battle all night against a low-three quarters southpaw in Baker.

“We sat in traffic on the highway and everyone was getting nervous that we were going to be late for the game. We wanted to make sure we had enough time to stretch and get loose to compete against theses guys,” Ridge manager Alex Santiago said. “We had a slow first inning but picked it up quick after that. We played hard, we dug deep within ourselves and got this win like we wanted all along.”

Gateway manager Jim Moran knew that it was going to be tough but didn’t expect the outcome he saw.

“Our guys worked their tails off tonight. It may not look pretty on the scorecard but I know we played with everything we had. Gotay was just great,” Moran explained. “We had to take him out. His pitch count was over 80 and we paid for it after we took him out. But, I know that we’ll be better from this. It’s the close losses that make you grow the most.”

Ridge plays next on Tuesday, March 8th at the All Saints Academy. Gateway hosts Liberty at home next Tuesday the 8th as well.