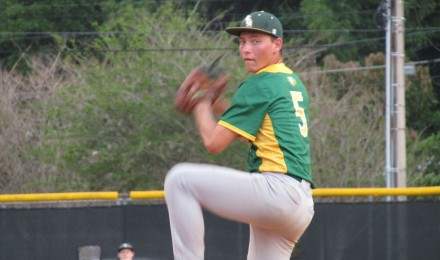 Friday night’s game between Central Florida Christian and Orlando Christian Prep began with a bang. Eagles’s third baseman Kevin Devine launched a moonshot into center field, and for the longest time it looked as if the ball would sail over the fence with the help of the humid April air. Warriors’ center fielder Taylor Panell had something different in mind, making a sensational catch before smashing into the wall for the first out of the game.

This district match up had many hard-hitting moments like this one, as it seemed the ball kept leaping off the bats for line drives all evening long. The battle lasted into extra innings, where Central Florida Christian prevailed with a 2-1 victory.

Besides giving Orlando Christian Prep it’s first loss of the year, Central Florida Christian narrowed the gap at the top of 2A-4. The Warriors are in first at 12-1, with the Eagles close behind with a 9-1-1 district mark.

The Warriors (14-1) struck first, putting together a first-inning burst that rewarded them with a 1-0 lead by the start of the second inning. Christian Castro got on base and proceeded to steal second, third, and then home after the throw to third missed its mark.

It didn’t take long for the Eagles (11-5-1) to answer. Trey Jordan knocked a leadoff double and later scored by stealing home — much like his opponents the inning before. Kyle Hemani also had a single, but was stranded thanks to back-to-back strikeouts.

After this the game went silent for a while. Both starting pitchers were masterful throughout the middle of the contest, and both ended up pitching until the very end. One of the highlights for Warriors’ pitcher Anibal Martinez was when he struck out the side in the top of the seventh to give his team a shot at the walk-off.

“He’s got a lot of grit,” Orlando Christian Manager Cody Hancock said of Martinez. “He’s one of our aces, and he’s our guy we’re going to go to. He kept telling me he could keep going, and if he’s telling me that I’m going to go with our guy.”

On the other end, Eagles pitcher Nick Peterson worked himself out of jams, struck out batters, and kept his pitch count surprisingly low during the game.

“I’ve had quite a few days off, so I was rested and ready to go,” Peterson said.

In the top of the eighth inning the Eagles broke through thanks to a bunt off the bat of center fielder Andrew McCabe. Andrew had a knack for getting on base the whole game, drawing two walks in his first few at bats before laying down the bunt that eventually put his team ahead.

“My coach gave me the bunt sign, and I knew this was the moment,” McCabe said. “Once the ball came off the bat and I saw it was down, I ran as hard as I could down the line.”

Anibal Martinez looks for the sign early in the game.

McCabe will attend the University of Florida this fall, and was just happy to be that guy to come through for his team.

“It feels surreal because I know my team puts in so much work, so for me to come through it was like I got to pay off their hard work,” McCabe said.

It was a hard-fought game between two talented squads, and it served as a nice primer for an Eagles club that has a tough schedule ahead of them.

“This game just helped bring us back together with how we were before,” Eagles manager Larry Oldham said. “We’re also playing super tough teams at the end, so that way we get to really challenge ourselves at the end.”

As for the Warriors, Hancock has a good idea of how to get his team to rebound.

“One of the things I’ve been preaching all year Is that how you respond in situations like this shows what character you have and what you’re made of,” Hancock said.