Tampa Catholic Wins Big Over The First Academy In 4A Semifinal 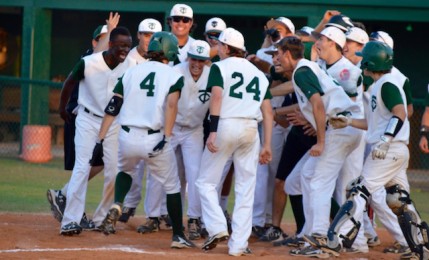 Tampa Catholic celebrates after Grady’s go a head home run in the sixth.

A wild sixth inning was all the difference for Tampa Catholic Thursday night. Timely hitting and heads-up base running were keys to defeating The First Academy 6-2 in a 4A regional semifinal.

The fun began in the bottom of the sixth for Tampa Catholic. Connor Grady lead off the inning with a go-ahead home run to left giving the Crusaders the 3-2 lead. The team never looked back adding three more runs in the inning on two infield hits, loading the bases for Cater and Jordan Lala, who both had RBI singles in the inning.

Grady talked about what the go a head home run meant for his team after the game.

“It was a huge hit for our team and they really rallied around it and pushed us over the top,” Grady said.

The First Academy struck first, in the top of the fifth inning. Outfielder Kendrick Calilao led off the inning with a double to left field. Advancing to third on a single by left fielder Joseph Charles, Calilao scored on a Cade Siedecker sacrifice fly for the first run of the game.

Tampa Catholic quickly answered in the bottom of the fifth with two runs of their own. Shortstop Garrett Back began the inning with a walk. A passed ball and strong base running by Back put him in scoring position with no outs. Tayler Lala laid down a slow bunt right back to the pitcher advancing Back to third and reaching first for an infield single. Back scored two batters later on a sacrifice fly by Christian Docobo. On the very next pitch second baseman Mitchell Carter also hit a sacrifice fly, bringing home courtesy runner Jordan Enriquez. 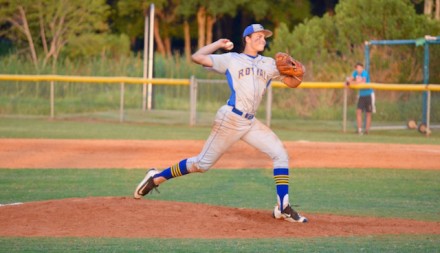 In the top half of the sixth the Royals evened the score on a long home run to right field. Chacon left a fastball high in the zone and first baseman Bopper Gilot took advantage, sending it sailing over the fence.
First Academy could not put together a late game rally, getting shut out in a three up three down seventh to end the game. Manager Scott Grove gave credit to Tampa catholic and was proud of his team in defeat.

“They put the ball in play and we missed opportunities,” Grove said. “Our guy pitched a pretty good game; they just played better. It was one of those nights.”

The Crusaders’ look to take this momentum in to the regional finals as they continue to seek their school’s tenth state championship. Manager Ty Griffin believes that his team has what it takes.

“I tell our kids every day you can never give up, we went our there stuck with it and got the hits tonight and I really like our chances as we move forward,” Griffin said.

Time will tell what the future holds for the high intensity offense of the crusaders as they pursue a state title, but tonight the team is celebrating.

“This is a big win and a great way to go into the regional finals we will be celebrating this one,” Chacon said.