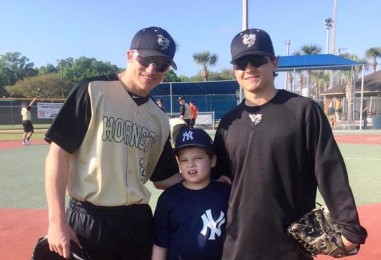 Joe Skinner takes part in the Miracle League in March 2015.

When I first learned the news that Bishop Moore senior Joe Skinner had lost his battle with leukemia and passed away, I was filled with remorse even despite the fact that I never had the privilege of knowing the brave young man.

We here at High School Baseball Network are fortunate to have a close and personal relationship with the baseball community across the state of Florida, and any loss of any of our players feels personal and emotional. Yet it didn’t take long for me to realize that Joe Skinner was something even more special than that.

HSBN has the unique ability to connect and serve as a voice for our extended baseball community, a fraternity of players, coaches, parents, officials and fans that are all united in their love of the game of baseball. I wanted to pay tribute to Joe Skinner and help to provide a place where all that knew and loved him could come and appreciate all that he has meant to this world. But how could I speak properly and respectfully about someone that I never knew?

In trying to tell Joe’s story one more time I was amazed by all the people he reached and who took time to recognize and honor their departed teammate, brother, classmate and son. Coaches all around my native South Florida shared stories and reflected on how Joe influenced them, even if they only met him once. Fellow baseball players across the state paid tribute, from people like Lakewood senior Bo Bichette on the west coast in St. Petersburg to Logan Nugent at Trinity Christian in Jacksonville. It did not take me long to realize just how special Joe Skinner is when I saw how many people he influenced and how they all took the chance to remember him and say thank you.

“When we found out the news, it was hard, since we weren’t expecting it,” Bishop Moore senior Eric Forbrick said about learning that Skinner had passed away. “When we got to the field we practiced that day, and the game after that at Lake Highland Prep the crowd was awesome and they had his picture on the scoreboard. It was like we looked up and knew he was there. Obviously you can’t see him, but you can feel him. You can feel his presence by the atmosphere and the energy.”

Joe Skinner will not soon be forgotten.

“When you have a talent like Joe, he’s unforgettable on the field. But if you get to know him as a person, he’s an even better person,” Bishop Moore manager Tony Mehlich said.

In preparation to write this memorial I spent some time online reading about Joe’s battle with a disease that no parent ever wants to watch their child fight. I learned how he was diagnosed with B-cell acute lymphoblastic leukemia just weeks after signing his college letter-of-intent for UCF, and how a port infection led to septic shock and ultimately claimed his life even as he was scheduled to take part in an experimental treatment aimed at fighting off cancerous cells in his bone marrow. 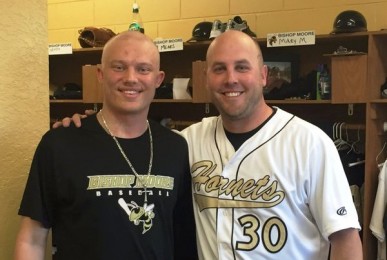 Upon learning of his ailment, Skinner served as an inspiration and a role model. Although he was eligible for a wish through the Make-A-Wish Foundation, he turned it down because he felt those opportunities should go to younger children in similar situations. Instead, with the help of his teammate, Mikey Giordano, Skinner started the #SkinnerStrong movement through t-shirts and wristbands that helped raise thousands of dollars for the Make-A-Wish Foundation.

Joe served as an inspiration in every way he knew how, but mostly just by being himself. Although he was barely strong enough to stand with his teammates during their Senior Night this year due to chemotherapy treatments, he found the strength and was there to share that moment. This season he was able to step in and take his final at bat as a baseball player during a game in mid-February. Even when in the hospital he was receptive to media attention about his story and used it to bring awareness and again help others.

“Even when he was sick he was still coming out to the field taking BP, taking ground balls and still throwing. It’s all you can ask for,” Forbrick recalled.

Joe was a standout player that helped lead Bishop Moore to the regional finals in his junior season. This year his teammates managed to take it one step further, reaching the state tournament they had all dreamed of making it to together. With his spirit living on through his teammates, coaches and fans, there is no doubt that Joe was there at the Hornets’ game against Monsignor Pace. His team played the game the way he demanded of himself, and he lives on through them.

Skinner relayed his positive approach through his Twitter account. In January he posted a personal video of himself taking batting practice with the caption: “I’m gonna be ready even if some people think there’s no way #Hornets”. He also shared a memorial for late ESPN anchor Stuart Scott, who passed away in January, 2015, with an impressive quote Scott gave during his well-publicized fight with cancer.

“When you die, it does not mean you lose to cancer,” Stuart Scott said. “You beat cancer by how you live, why you live, and in the manner in which you live.”

In one of Joe’s final Twitter messages he also took the chance to personally thank everyone for their support. On January 16th he wrote: “I was disappointed to have missed our Senior Retreat. I heard it was a great time and I wished I could’ve been there. To the people who wrote a letter to me I wanted to say thank you very much, they really made me smile. It’s amazing to know I have such great support, and even before all of this when I first transferred here I felt welcomed and I can’t thank you enough for these last couple years. I love all you Seniors; you guys are truly the most amazing friends I could ask for.”

I never got the privilege to know you, Joe. But you have touched my heart and influenced me just as much as all those who were fortunate to have you in their lives. Your inspiration lives on as strongly as your memory, and on behalf of High School Baseball Network and the baseball community, we thank you.