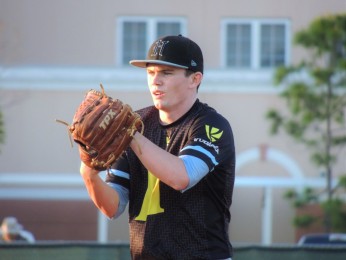 The Huskies’ Joe Sheridan pitched a complete game shut-out, struck out ten and drove in three runs, going 3 for 4.

The Hagerty Huskies combined flawless defense, timely hitting, and lights out pitching, to capture the 8A regional championship from the Seminole Ridge Hawks 4-0 Tuesday night in Loxahatchee.

The Huskies scored a run that would stand up throughout the game in the top of the first inning. Riley Green doubled to the opposite field with one out. Sheridan then legged out an infield hit to put Green on third. Britt Crawford’s fielder’s choice drove Green home. The play was not without controversy.

Second baseman Zack Rogers appeared to have tagged the runner coming from first for an apparent inning ending double play. The runner was called safe at second, however, and the first run was on the board.

“Getting that run in the first inning gave me confidence to go out and just pitch like I know I can,” said Sheridan, who will head to UCF this fall. “At the beginning of the year, our defense was a little shaky but we kept working and working and now we’re here. At the end it was all adrenaline and I was feeling good.”

Huskies’ manager Jered Goodwin has reason to share that confidence.

“I’ve had a lot of good players over the years but no one has done what he’s done both ways. Pitching, he holds about every school record there is and he’s hitting over .460 with twenty stolen bases. When he’s on the mound, we think we’re going to win.”

The Hawks threatened in the second inning when Ryan Batezel walked and Brett Fiore’ singled with one out. Sheridan struck out the next batter and induced a 4-3 put-out to end the inning. 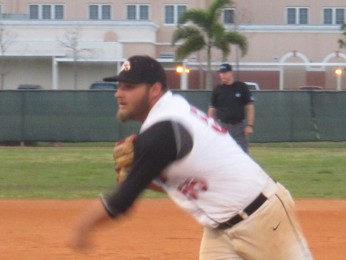 The Huskies doubled their lead in the fifth. An infield throwing error put Brian Ellis on first with two out. Riley Green singled to left and Sheridan outraced the first baseman to the bag for an RBI infield single giving the Huskies a 2-0 lead.

The bottom of the fifth was action packed. Fiore’ sent a line drive to deep left where Cameron Beams made a running, leaping catch for the first out. C.J. Bottiglieri dropped a soft liner down the first base line which skipped into foul territory. Huskies’ right fielder, Green, hustling, was able to throw out Bottiglieri trying to stretch his hit into a double.

With two out, Justin Reyes singled. Zack Rogers struck out with the pitch going all the way to the screen. With catcher Steven Markowitz unable to locate the ball, Sheridan sprinted past Markowitz to keep Reyes from scoring and Rogers at second. Sheridan then closed the door with a 4-3 put-out.

The Huskies added on in the seventh. Beams and Bryan Kowalski walked. A wild pitch moved the runners to second and third. With two out Sheridan doubled to the opposite field, scoring both runners for the final margin of 4-0.

The Hawks’ home field is infamous for wind. On this night, the flag was stiffly blowing from the direction of second base toward third. Hawks’ left fielder, Joey Shergan made two exceptional catches to keep his team in the game early. In the first, he robbed Cameron Alba by backtracking then sprinting along the warning track for 50 feet to make the
catch. In the third inning, he made a similar catch of a Sheridan liner being blown into the left field corner.

Britt Crawford, whose first inning fielders’ choice drove in the only run needed by the Huskies noted both his team’s game plan and the key to their success. 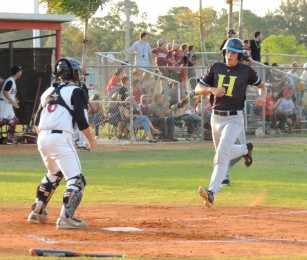 A huskies’ insurance run scores in the fifth inning.

“They had a good pitcher on the mound, so we had to put the ball in play and force them to make plays,” said the Huskies’ first baseman. “We all have great chemistry, we love each other and that’s how baseball should be played, really.”

“They just made more plays and had a few more hits,” said Farjad. “We’re all going to miss each other a lot. It’s a very sad day.”

Hawks’ manager Trent Pendergast, while feeling his team’s disappointment, was able to summon a broader view.

“Our guys did a great job all year. We made the regional finals, shoot, that’s a good year no matter how you slice it,” said Pendergast. “I’ll take away from this year more than the wins, but a great group of kids. Not just ballplayers but a special group of kids.”

Hagerty will move on to face Forest in the 8A semifinal next Friday at jetBlue Park in Fort Myers.