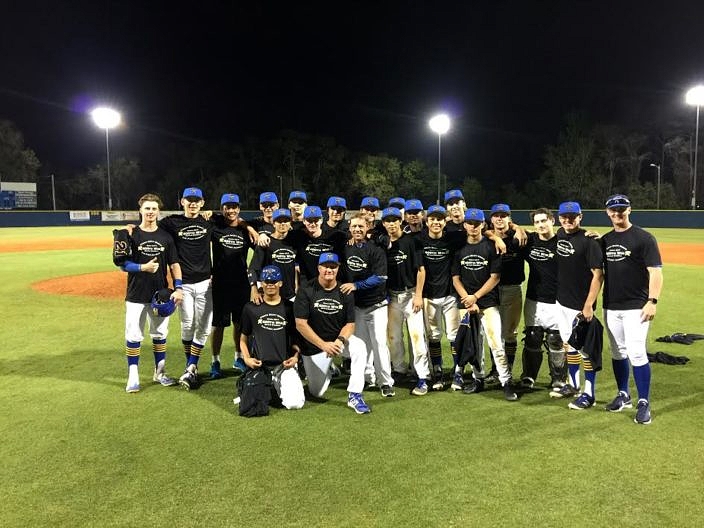 “The kids were just so excited and it was a special night,” Scott Grove said of winning his 400th game.

It is not very often that a manager starts a day two wins away from a personal milestone and ends that day celebrating just that accomplishment. Following a two-game sweep over Norfolk Christian Academy, Virginia, The First Academy Royals managed exactly that, earning manager Scott Grove his 400th career coaching victory.

Doubleheaders are not as common in today’s high school baseball world as they used to be, but when the Royals had a cancellation in their schedule they were able to arrange two games against the Ambassadors. After winning the first game 15-3 in five innings, the Royals took an early lead and then erupted late to claim a 12-2 victory that reached Grove’s big moment.

“To win 400 high school baseball games you have to be blessed with a lot of talent, and I really have been,” Grove said. “It was just a real special night and the weather here in Orlando tonight was awesome. We have one of the nicest fields and complexes in Orlando, so it just worked out great. It was nice to win at home against a pretty big crowd. It was a lot of fun.”

Raymond Fields earned the win on the mound, pitching four scoreless innings in the nightcap. Fields allowed one hit and two walks while striking out five.

Every starter on offense reached base for the Royals (6-1) in the second game, and nearly all of them scored a run to contribute. Leadoff hitter Cash Case led the way by going 3-for-4 with two RBIs and two runs. Michael Morse was 2-for-2 with an RBI, a run and also walked twice two reach base in all four trips to the plate.

“The kids were just so excited and it was a special night,” Grove said. “My wife, Shaye, had t-shirts made up for the guys and my son is on the baseball team, so it was special to have him out there. None of these guys were born when I first started, so I guess I am getting old. To win 400 games you have to coach for a while, and I am in my nineteenth year.”