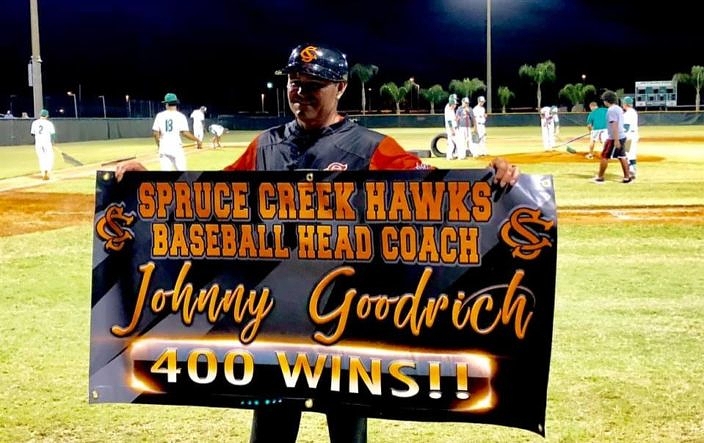 The Spruce Creek Hawks rewarded veteran manager Johnny Goodrich with a milestone victory on Wednesday night, as Goodrich recorded his 400th career coaching victory in their 11-1 road win over Flagler Palm Coast. Following the victory the team showered their skipper with a Gatorade bath as players, coaches and fans all celebrated the accomplishment together.

“I have been very fortunate to have been surrounded by really good players and coaches,” Goodrich said. “As nice as 400 is, it does not compare to one of your kids signing their NLI of intent to play at their dream school, signing their professional contract, or watching your team dog pile after winning the state title. Lastly, I am very thankful to both Spruce Creek High School and Merritt Island High School for the opportunity to coach, teach, develop and impact the lives of those players.”

The Hawks (19-3) left no doubt of the outcome following back-to-back innings in which they scored all of their runs in the second and third. Evan Mastromauro got the scoring started when he delivered with the bases loaded with a three-RBI double on a liner to center field. Sal Grinstead followed with an RBI double of his own and later scored on an error for a 5-0 advantage.

Spruce Creek kept it going with their next swings. Parker Hazen got it going again with a solo home run, and Mastromauro came through again with an RBI single that plated Joey Balsam. Cameron Orie drove in a pair with a double and Brennan Keil followed with an RBI double as well.

Zack Bennett picked up the win on the mound. He allowed one earned run on two hits and struck out seven in four innings of work. Balsam closed out the fifth with a scoreless inning, recording one strikeout. 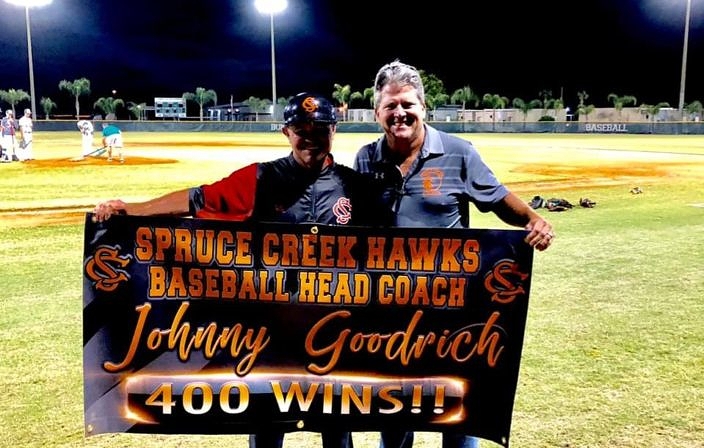