Osceola Shuts Out Ridge To Win 9A-5 Championship 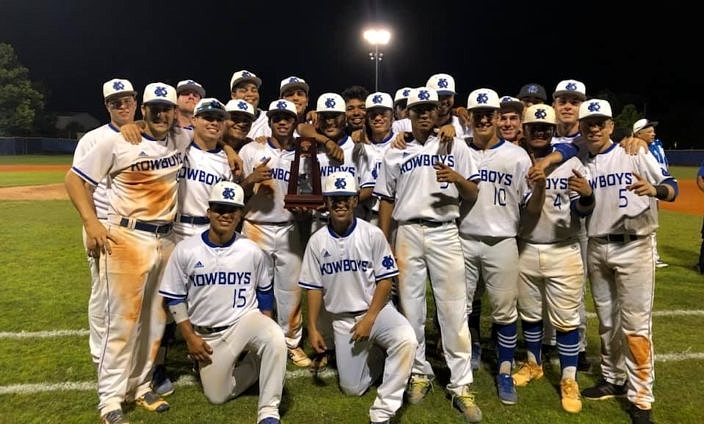 The 9A District 5 champion Osceola Kowboys. *Photo courtesy of @Kowboysbaseball.

The Osceola Kowboys claimed their second consecutive district championship, as Manuel Lopez and Keniel Carrion combined for a 6-0 shutout over the Ridge Bolts in Thursday’s 9A-5 title game. Lopez earned the win with six scoreless innings in which he held Ridge to four hits and a walk, while striking out three. Carrion then tossed a scoreless seventh inning, walking one and striking out two to preserve the victory.

Both teams advance to the regional playoffs that begin next week, with Osceola (17-5) hosting the 9A-6 runner-up and Ridge traveling to take on the eventual 9A-6 champion.

Osceola broke the scoreless contest with its first pair of runs in the third inning. Isaiah Rivas lined a double to center and Derik Diaz reached with a bunt single to put runners on the corners. Andrew Fernandez then delivered a liner to left to put the Kowboys on the board, and Frankie Santaniello later added an RBI single that drove in Fernandez. 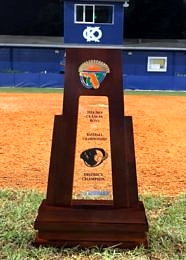 The 9A-5 trophy at its new home at Kowboys Field.
*Photo courtesy of @Kowboysbaseball.

Osceola added on two more runs in the fourth. Carrion was hit by a pitch and Rivas followed with his second double of the night, which set up Diaz for the sac-fly RBI that drove in Carrion. Fernandez then collected his second RBI of the game with a base hit that plated Rivas.

Two more runs in the sixth closed out the scoring and helped ice the victory. Brett Birchler drew his second walk of the game to start the inning and Jorge Rivera was next with a double to center that put both runners into scoring position. Marlon Sanchez then came through with a base hit that sent them both home to put the game further out of reach.

The Bolts (9-16) came into the final off an epic semifinal victory over Haines City, a 13-inning battle that may have used up some of the team’s energy. Alex Munroe and Zach Evans combined for an unprecedented no-hitter in the 3-0 win over the Hornets. Munroe struck out 13 without allowing a walk or hit in eight innings of work, and Evans had four strikeouts and only one walk to earn the win when the Bolts’ offense finally broke the scoreless drought in the top of the 13th inning.

But on Thursday the Ridge offense was unable to muster the same sort of heroics, as the Bolts had just four hits total. Jayden Richards went 2-for-3 to account for half of that offensive production.