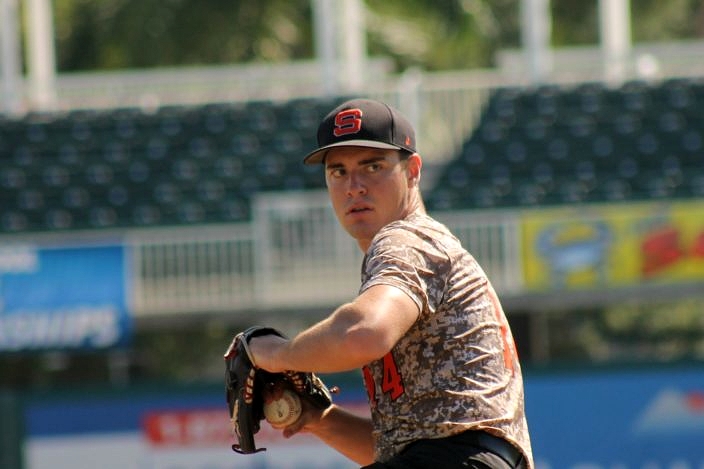 Matt Allen earned the victory after nearly going the distance and finishing with eight strikeouts.

The Seminole Seminoles have all the confidence in the world, and especially when ace pitcher Matt Allen is on the mound. Thursday morning Allen reminded everyone just where that comfort comes from, as he led his team to a 12-4 victory over the Palm Beach Central Broncos, in a 9A state semifinal at Hammond Stadium in Fort Myers.

The flame-throwing, senior right-hander impressed on the hill, as the Broncos struggled to string hits together. Meanwhile, Central’s pitchers had a tough day on the mound and just as hard a day on defense in walking 13 batters and committing four errors.

“The game didn’t get bigger than it’s supposed to be,” Seminole manager Kenne Brown said. “It’s the same game that we played from the very first inning of the year to here, so that is what we tried to focus on. Sometimes you get to a place like this and the whole ambiance of the place takes you out of your game. But that didn’t happen.”

The Seminoles jumped ahead right away with a run in the top of the first. After the lead-off batter was retired by Broncos starter Jeremy Neff, Craig Conk singled up the middle. A wild pitch moved him to second, where Daniel Hope supplied a liner to right field for an RBI single and a 1-0 advantage.

The Broncos stranded a runner in the first, but answered back to take the lead in the bottom of the second. Ethan Wilder ripped a single to right and Jonathan Napoles was hit by a pitch to put some ducks on the pond. Guillermo Garcia dropped down a sacrifice bunt intending to move the runners, but a throwing error made it even more as Wilder raced home to tie the score. Sam Astern fell behind 1-2 but then responded with a big swing that sent the ball sailing just out of reach of the left fielder for a two-RBI double that had Central up by two runs. 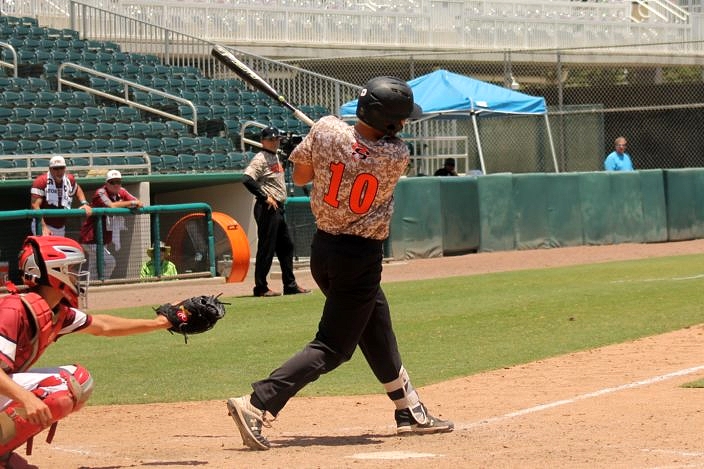 Zachary McAuley drives in a pair with a bases-loaded single in the seventh.

“We had made an approach during practice to get our bat down and have a wide base, and he left a curveball hanging and I hit it,” Astern said.

Seminole (21-9) got a run back in the third to keep things close and exciting. After two quick outs, Matt Allen drew a walk and gave way to courtesy runner Charles McDaniel. A passed ball allowed McDaniel to race to second and Mason Mazerredo delivered a grounder to left for an RBI double that made it a 3-2 ball game.

Central went to the bullpen an inning later and the Seminoles immediately put the pressure on again to retake the lead. Both Sean McArdle and Andrew Garcia walked to start things off, and Fonseca laid down a sacrifice bunt that resulted in another throwing error that allowed both runners to score and Fonseca to advance all the way to third base. A balk then let Fonseca jog the final ninety feet to a 5-3 lead.

When Conk walked to follow it prompted another pitching change to hard-throwing right-hander Jude Baxt. A wild pitch gave Conk second base, and Hope followed with a walk that landed him at first base. Jalen Bandhoo came in to run for Hope, and a grounder to second base moved both base runners into scoring position. A liner right to shortstop Michael Brooks ended the rally. 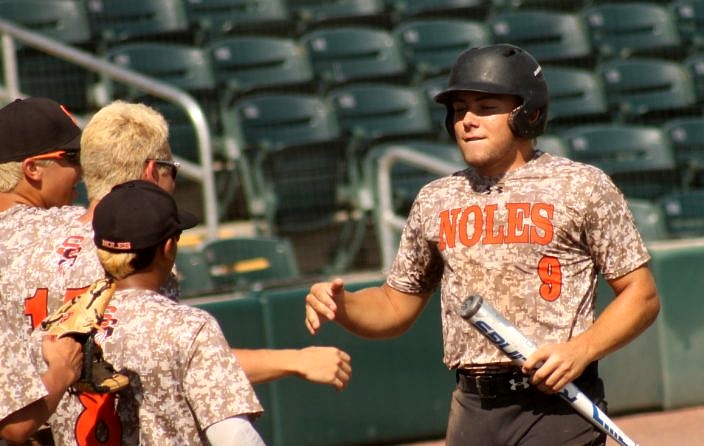 The Seminoles celebrate after scoring the first of many runs on the day.

What many do not know about Seminole is that the catcher, McArdle, calls all the pitches. Midway through the action Allen credited his backstop in making the adjustment that helped close the door. The two players got together and devised a new mode of attack that worked wonders to keep Allen in control and making the Broncos swing at the pitches he wanted them to.

“It wasn’t until Sean had a light-bulb moment and he was the one that pointed out that I have a high spin rate fastball, so we wanted to go above the hands and let them keep popping it up,” Allen said. “Palm Beach Central is really good and there is a reason they are here. I knew that one-through-nine it was going to be a tough at bat and I wasn’t just going to blow it by them. I can’t just throw it right down the middle, and I saw what happened in the first and second inning when they were tagging it. So I had to work through those growing pains, getting together with Sean and getting a new game plan. They were getting really close to the plate so I dared them to hit a fastball on the inside of the plate, and that was what we started doing in attacking the hitters in-and-out and up-and-down.”

Now pitching with the lead, Allen found his comfort zone and retired the side in order in the fourth and again in the sixth. Meanwhile, his offense continued to pound away in support behind him, putting up a big inning that gave him a chance to collect himself.

“Sean is brilliant,” Brown said. “He has to catch a guy who throws as hard as Matt and he has to manage that, and he has to be smart enough to communicate with him. He is a very intelligent kid and it starts with our catcher. He’s done a great job all year for us.” 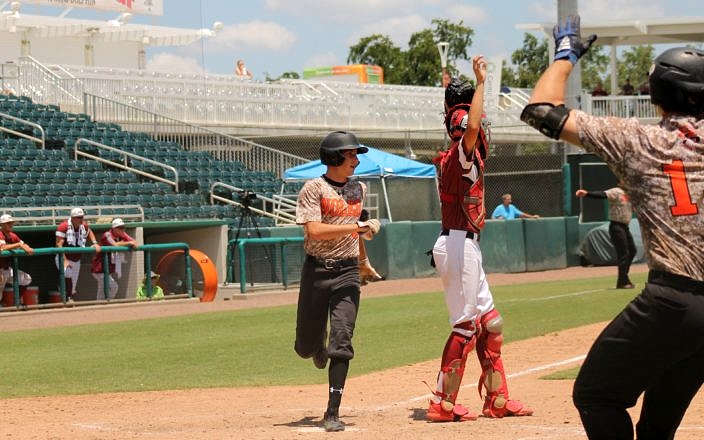 Seminole kept the pressure on right to the very last inning.

McArdle got things going in the fifth by clubbing a shot deep to the left field wall for a lead-off double that again prompted the Broncos to go the bullpen for a fresh arm in right-hander Ethan Wilder. Joshua Glazar came in to replace McArdle on the bases, and pinch-hitter Ricky Gaines moved him to third base on a grounder to first base. A soft roller in front of the plate provided just enough time for Fonseca to reach first base with a single that put runners on the corners, and an errant pickoff attempt allowed Glazar to make it a three-run lead.

“Those breaks were huge and the offense definitely helped me out there,” Allen said. “That gave me the break that I needed. It allowed me to get fluids and cool off sitting in front of the fan. I was really sweaty and there wasn’t a whole lot of dirt for me to keep on my hands, so I continually went to the dirt.”

The Seminoles doubled their run total in the top of the seventh to leave no question of the final outcome. McArdle singled and Gaines was hit by a pitch, before the lead runner was erased at third on a sac bunt from Fonseca. A walk to DuBose loaded the bases, where Zachary McAuley struck for a liner up the middle that scored two more. Allan walked to reload the bases and Hope unloaded on a pitch for a blast deep to center for a base-clearing triple. A sac-fly off the bat of Mazerredo plated Hope to close out their scoring.

Seminole will take on the Coral Reef Barracudas on Saturday afternoon at 12:30 PM in the 9A title game. Coral Reef advanced following a 7-3 win over Timber Creek in Thursday’s other semifinal.