The First Academy Blanks Trinity Prep For 4A-3 Championship 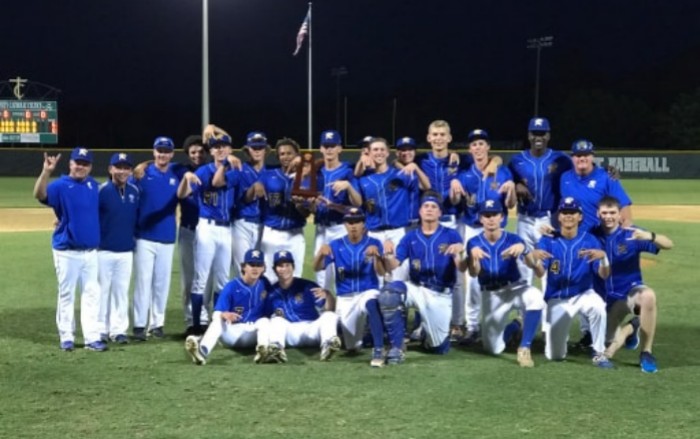 The 2019 4A District 3 champion The First Academy Royals.

The First Academy Royals found magic on the mound at just the right time. Down the stretch in the late part of this regular season the Royals struggled to keep teams from scoring, allowing an average of more than six runs over their final eight contests. But once the playoffs arrived, so did the opponent’s scoring.

The First Academy posted two consecutive shutouts in the 4A District 3 tournament this week enroute to their first district title in two years. After blanking Trinity Catholic 6-0 in the semifinal, senior Matt Edwards delivered a complete-game shutout for a 6-0 victory over Trinity Prep in Thursday’s championship. Edwards allowed three hits and a walk in seven scoreless frames, and he struck out six.

The Royals (19-8) wasted no time in taking control, grabbing a 3-0 lead in the top of the first inning. Brett Kelly was hit by a pitch and Edwards followed with a sacrifice bunt in which he reached base on an error that also allowed the runner to score. Edwards came in on a passed ball and then Chenar Brown smacked a double to left. Bryce Fisher dropped down another sacrifice bunt and again an error allowed the base runner to cross the plate.

Three more runs padded the lead in the fourth. It was Edwards again with the big play, this time a two-RBI triple to left. Brown followed that with an RBI single that closed out the scoring.

Alexander Roberts led the Saints (13-6), as he reached base all three plate appearances by going 2-for-2 with a walk. Charlie Aronson had Trinity Prep’s only other hit.

Both teams advance to next week’s regional playoffs, where The First Academy will host the 4A-4 runner-up and Trinity Prep will play on the road against the 4A-4 champion.