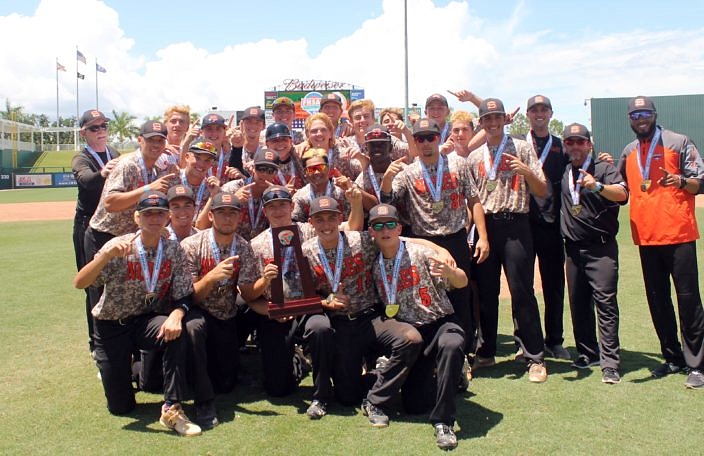 Those final steps to the summit are always the hardest ones. Playing in the Class 9A state final at Hammond Stadium on Saturday afternoon, the Seminole Seminoles delivered a performance befitting a champion. Channeling all the passion, effort and emotion of their turbulent season, the Seminoles seized their moment and claimed the title as state champions. A solo home run from Mason Mazarredo was the difference, as Seminole prevailed with a 1-0 victory over the Coral Reef Barracudas.

“I was thinking double, and when the ball left the yard that was real exciting,” Mazarredo said of his home run with wings. “I was looking for a pitch I could drive, and I just wanted a pitch I could do damage with. My at bat before that I got fooled on a changeup that was down, and he threw me two changeups that were away in the dirt. Then he left one over the plate, and it got out.”

Mazarredo connected on a 2-1 offering in the top of the sixth inning, and the ball carried to bounce off the top of the left field wall and over for the solo home run that was the difference. One almost has to wonder if some force from beyond helped provide the last puff of wind needed to complete the journey, as the team dedicated its entire season in honor of Charlie Schomer, the team’s announcer who passed away after suffering a medical emergency at the team’s first game of the year. 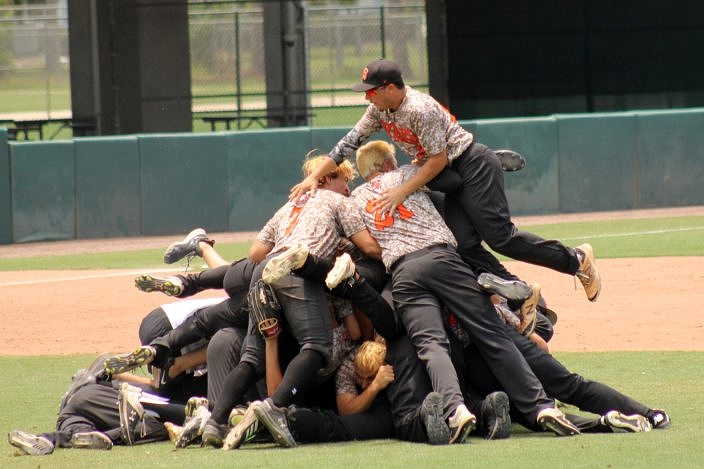 The Seminoles dogpile after recording the final out to become state champions.

The Seminoles were certain that Charlie Schomer was watching with pride, and it meant everything to them that they honored his memory by winning a state title. After Seminole manager Kenne Brown found his friend suffering a medical emergency just before the first pitch of the season, it brought a whole new perspective to the Seminole family.

“All I could do was hold him and try to comfort him and tell him everything was going to be okay,” Brown said. “I called Charlie to come announce our games because I knew he would be a professional. I wanted somebody I could trust, and I knew he would love these boys and love being a part of it. He ended up dying a couple of weeks later, so in the back of my mind I ask what would have happened if I hadn’t asked him back. Would he be alive? So I just told my guys that you never know when you are going to go and you have to play like it’s your last day. It was Charlie’s last day that day that he showed up to the ball park. It’s a sad story, but you talk about divine intervention, you better believe it. I think there was somebody behind that. I think Charlie was behind a lot of stuff. This is for Charlie.”

Schomer and every other baseball fan should feel nothing but admiration in how both teams competed. The two sides engaged in a fierce tug-of-war all day long, and when the final result was settled players from both sides saluted one another with dignity and respect. 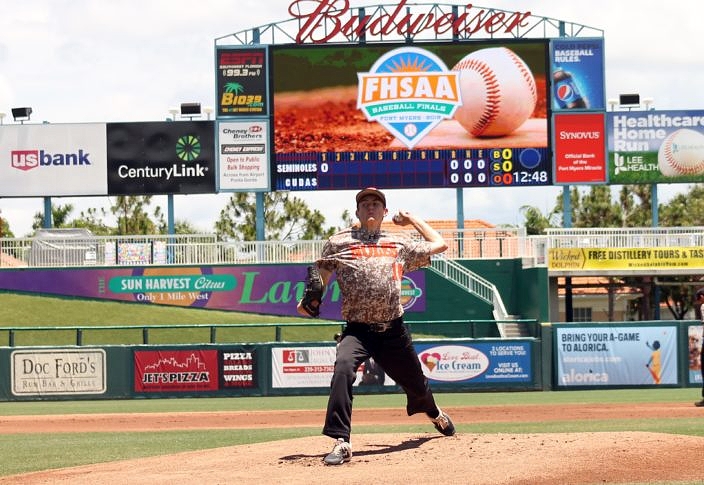 Charlie McDaniel pitched a complete-game shutout with five strikeouts to earn the win.

“Real recognizes real. Game recognizes game,” Coral Reef manager Chris Leon said. “I taught my kids that. They are the state champs. I’m going to clap it up for them. I wish they were in our district and I wish we got to play them more, because those kind of games are fun to be in.”

Charlie McDaniel got the call on the bump for the Seminoles, and he delivered. The left-hander went the full seven innings for the complete-game shutout, holding the Barracudas to six hits and a walk. The southpaw pounded the zone in throwing 66 of his 95 pitches for strikes, and he recorded five strikeouts.

“There are definitely nerves going into it, but I think that is with anybody that is pitching in a state championship, whether it is me, Matt Allen or Clayton Kershaw,” McDaniel said. “It was about staying in the moment, and not letting the game get too big. Coach has been preaching all season not to let the game get too big, and it can’t be any bigger than it is. We were just out there playing our game having fun. We just had to stay focused on the moment.”

Coral Reef took a quality approach against McDaniel, and the Barracudas managed base runners in most innings. But the Seminole defense delivered a heroic effort, making big plays over and over to keep Coral Reef at bay. Shortstop Greg Fonseca kicked off the defense’s big day by calling a pick-off move that erased a base runner in the second, and the defense turned double plays that ended both the fourth and fifth inning.

“I was just telling Chuck to throw it in the strike zone and let them hit it,” Fonseca said. “Our whole defense came together and played well. We played the way we have played all year. Defense is key in baseball games.” 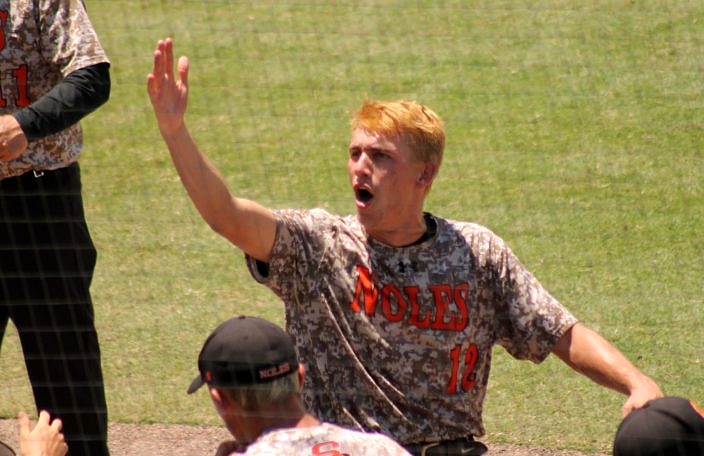 The Seminole players got the fans in the crowd going late by starting the Seminole War Cry.

Defense is always a pitcher’s best friend, and Saturday afternoon McDaniel had a lot of best friends. The Seminole defense delivered a heroic effort, making big plays over and over to keep Coral Reef at bay. After Michael Ogden laced a double over the left fielder’s head in the fourth, third baseman Craig Conk snared a hard liner and quickly fired the ball to double off the runner. An inning later Manny Duran singled on a flare to right, but a grounder up the middle was converted into a 6-3 double play.

“It’s great when you have guys that are willing to put their heart on the line just to play for you,” McDaniel said. “When you have that kind of respect you just feel like nobody can stop you on the mound. They come up to me and tell me they will do anything for me on the field and it is just a great feeling to know they are willing to give their all for you behind you. They just respect you that much. These guys play hard, and I thank them for being willing to play that hard and have that faith in me.”

McDaniel returned that faith by being his own best friend with the game on the line. With a runner on third and two outs in the bottom of the seventh, the batter connected on a weak floater that drifted just over the pitcher’s mound. McDaniel managed to track the ball even despite falling to the ground, making the catch that ended the game while on his back. After the game his coach playfully joked about his pitcher’s athleticism in that big moment.

“On that play, at least, I was athletic,” McDaniel laughed. “I was just trying to get weak contact to get an out, and it almost just froze when it happened. You saw the ball in slow motion, I stumbled a little bit because I was still trying to finish my pitch, and I just didn’t think. I just knew I had to go and get the ball, make the play and make the out.” 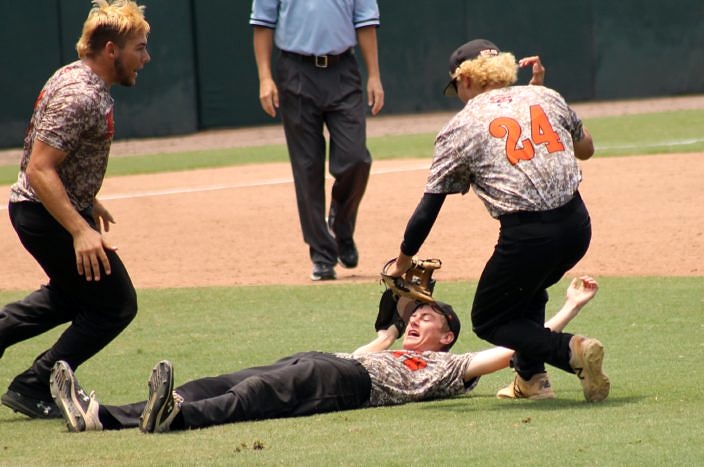 Charlie McDaniel cheers from his landing spot after making a dramatic catch to the end game, as his teammates swarm him for the dogpile celebration.