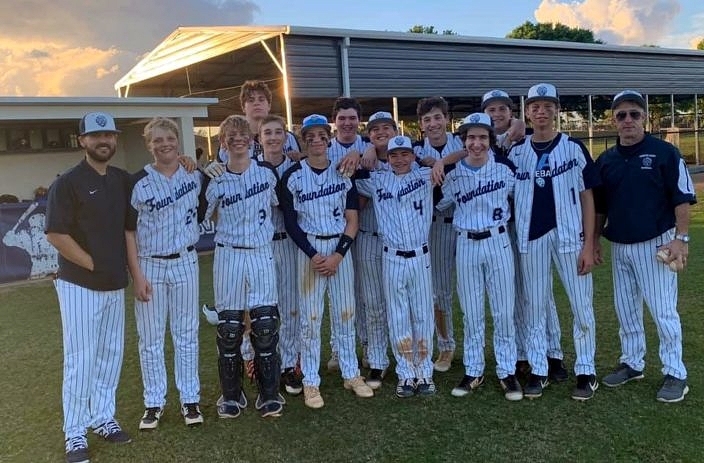 The Lions pose as a team while celebrating the big day. *Photo courtesy of @faathletics.

The Foundation Academy Lions capped a joyous day of celebration with a big district victory on Thursday, after a ribbon-cutting ceremony was held to commemorate a big donation being made to the school’s athletics department. Foundation received a $25,000 dollar donation that will benefit multiple sports, and the baseball team then went on to record a big 11-1 victory over Central Florida Christian Academy.

The Lions (2-0) wasted no time, jumping out with five runs in the bottom of the first inning. Jonathan Bosque lined a lead-off double to left field, Dylan Rose walked and Braden Holcomb got the scoring going when he ripped a triple to center field that plated both runners for a 2-0 lead. Trey Smith was hit by a pitch and Nathan Andrews followed with an RBI fielder’s choice ground out. Starting pitcher Kyle Marquart reached on a fielder’s choice, Aidan Earl walked and Tyler Pilson drove them both home with a base hit to left field.

Foundation Academy piled on five more runs in the second, and then closed it out via the mercy rule with another run in the fifth. Holcomb led the way by going 3-for-4 with a double, two triples, three RBIs and two runs, and Pilson went 2-for-2 with two RBI’s.

Marquat had a big day on both sides of the field. The junior picked up the win with three scoreless innings on the mound, allowing one walk and striking out three. He was also 2-for-3 with two runs and two RBIs.