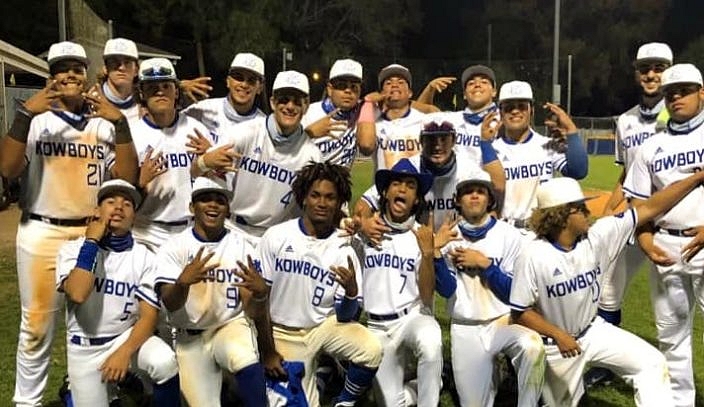 The Kowboys won every district game this season to earn the #1 seed in the 7A-6 tournament, which they will host this week. *Photo from @Kowboysbaseball.

The Osceola Kowboys have not lost in nearly a month. The Kowboys closed out their regular season schedule on Thursday with a 10-1 road victory over the Cypress Creek Bears, to win their seventh straight heading into the playoffs.

The Kowboys (17-6) are doing exactly what coaches always ask for in playing their best baseball at the right time, and they are now set to host the District 7A-6 playoffs next week. Osceola has the top seed after sweeping the district, and it will face the winner of Monday’s quarterfinal between the Bears (10-13) and the Haines City Hornets.

Osceola has gotten the job done on the mound all season, and that was again the case on Thursday as the pitchers combined to allow one run on two hits. Shawn Lara earned the win with four strikeouts in four shutout innings, and Blake Birchler, Darien Olivo and Danny Ramirez each delivered an inning of relief to close it out. The Kowboys only allowed an average of three runs per game, having only surrendered a total of 69 runs all season.

The offense enjoyed contributions from everyone to run away with the win. Danny Ramirez led the way by going 2-for-3 with a double, two RBI and two runs, and Blake Birchler and Jose Antonio Perez each scored twice. John Wolfe added an RBI triple and Jacob Martinez added an RBI.

Cypress Creek has been streaky all season, and the Bears close the regular season after dropping their final two games. They have proven they can string wins together, with three separate winning streaks during the year. Cypress Creek has not faced the Hornets (12-12) this season.