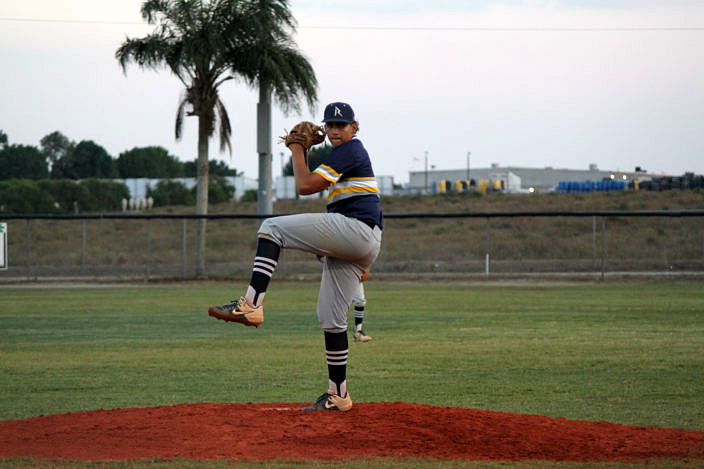 A.J. Gabriel pitched a complete game to earn the win for the Bolts on Friday. *Photo by Mallory Frese.

Before the start of Friday’s road contest at the Haines City Hornets, Ridge Bolts senior Avery Gabriel let his manager know that he was going the distance on the mound. The right-hander was true to his word, and he led his team the entire way for a 5-3 victory.

The Bolts (15-3) won their third straight, and they have wins in 10 of their last 11 games. They also won both meetings with the Hornets this year, after also taking a 9-5 home contest back in late February.

“This was a huge night for our program,” said first-year Manager Sebastian Caballero. “It’s the first time we sweep a regular-season series against Haines City. We knew we were going to have to battle for seven innings. We knew we were going to get their best. Dan Butler has done a great job with that ball club since he took over, and he was going to have them ready. Our guys did an excellent job all week to prepare for this game, and tonight they executed when we needed them to.”

Gabriel managed just enough pitches to last the full seven innings, closing with 109 total pitches. Although the limit for Florida high school pitchers is 105, a pitcher is allowed to finish the at bat when that threshold is reached if they were under that total at the start of the at bat. Had that hitter reached, Gabriel would have not been able to face any more.

Instead he closed off his big night with his tenth strikeout. Gabriel allowed three unearned runs on four hits and a walk, and he also hit two batters. He also chipped in at the plate by going 2-for-4 with an RBI.

“We got contributions from everyone, but it was led by our dude on the mound,” Caballero said. 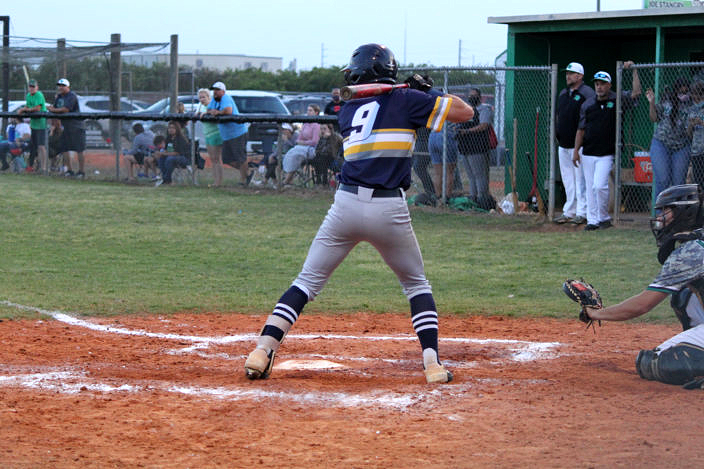 Brian Ehrlich was 2-for-4 with a double, a run and two RBIs to lead the Bolts. *Photo by Mallory Frese.

Brian Ehrlich set the offensive tone on the day by going 2-for-4 with two RBIs. Ehrlich led off with a double and later scored on a sac-fly RBI from Dariel Rios in the first to put Ridge ahead right away. He then capped off the Bolts’ scoring with a big, two-RBI single that drove in Delvin Camillo and Anthony Ferrer in the fourth.

The Hornets (11-9) answered back to take the lead in the bottom of the second. Josh Johns reached on an error and Remington Young was hit by a pitch, before a sacrifice from Kenneth Armstrong moved them into scoring position. Jadiel Rivera then delivered an RBI single, followed by a sac-fly RBI from Andrew Conrad that put Haines City up with a 2-1 lead.

But Ridge never doubted the comeback was coming.

“We set high expectations back in September. We knew we had a chance to be pretty good, but to see Ridge Community High School hold a 15-3 record was something no one was expecting,” Caballero said. “Unfortunately, it has not been enough to help us in the current district standings and because of that, we know that we still have work to do. We will celebrate this weekend, but it’s back to business again on Monday.”

The weekend celebration is only possible thanks to numerous contributions that helped lead the rally. Just as they have all year, the Bolts kept striking back. Juan Saldarriaga and Camilo both singled with one out in the fourth, and Saldarriago scored when Ferrer delivered an RBI bunt single. Ehrlich then followed with his big knock that made it a 5-2 advantage.

Gabriel did the rest. He surrendered an unearned run when Young reached on an error and came home thanks to an RBI single from Conrad in the bottom of the fourth, but only allowed two more base runners the rest of the way after that.

Haines City’s Austin Vakiener also went the distance in the contest. The junior allowed three earned runs on 10 hits and a walk, and he picked up four strikeouts.