The First Academy Blanks Trinity Prep To Win 3A-6 Title 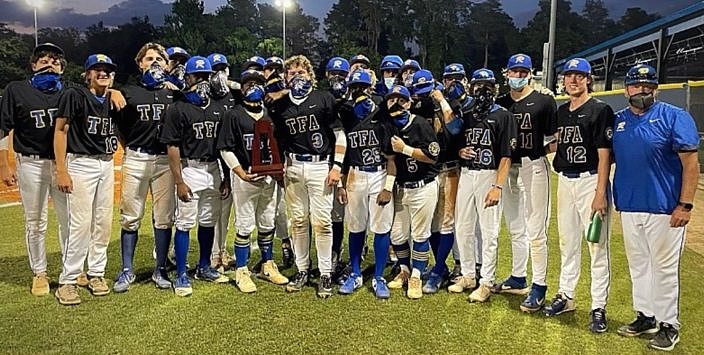 The 2021 District 3A-6 champion The First Academy Royals.

Pitching has gotten it done all season for The First Academy Royals, and that was again the case in Thursday’s District 3-6 championship. The Royals held their opponent scoreless for the second straight playoff game, and they rolled to a 15-0 shutout over the Trinity Prep Saints to win the district title.

First Academy (25-1) wins its third district championship in the last five seasons, to go along with titles in 2017 and 2019. There were no championships in the 2020 season that was cut short due to the global COVID-19 pandemic.

The Royals will now host in the opening round of next week’s regional playoffs, where they will take on The Villages Buffalo (14-8). Having lost but once all season, they will carry a 16-game winning streak into regionals.

The Saints (12-12) also advance into the regional playoffs, where they will travel to take on the 3A-5-champion Trinity Catholic Celtics (14-10). They defeated the Crooms Academy Panthers in the quarterfinals, and then upset The Master’s Academy Eagles in the district semifinal to earn their regional playoff berth.

Ben Barrett and Harrison Miller teamed up for the shutout, the team’s twelfth shutout on the season. Barrett struck out five in three innings, allowing two hits and no walks. Miller issued a walk and recorded a strikeout during a scoreless fourth inning that sealed the victory.

John Martinez and Aiden Stillman both had a base hit to account for the only offense for Trinity Prep.