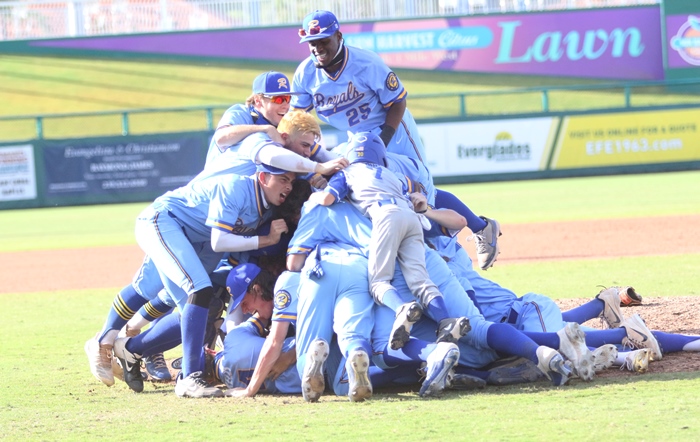 The Royals dogpile in celebration after winning the state championship.

For the first time in history, The First Academy Royals are state champions.

The Royals completed an unprecedented playoff run with a 3-0 win over perennial state power Westminster Christian, in Tuesday’s 3A state title game at Hammond Stadium in Fort Myers.

“It’s just unbelievable. I couldn’t be more proud of every one of the players on our team,” Royals Manager Scott Grove said. “They came here with a vision, and there are not a whole lot of people who can say that when they dream about something it comes true. It came true today, so we are thrilled to death.”

The Royals (30-1) scored all of their runs in a pivotal seventh inning. The Warriors committed several critical errors in the inning, and The First Academy capitalized on all of them.

Trent Kelly got it started by lining a lead-off base hit through the left side in the top of the seventh. It was Kelly’s second hit of the day, this one coming off of a side-arm pitcher the likes of which most high school hitters struggle against. 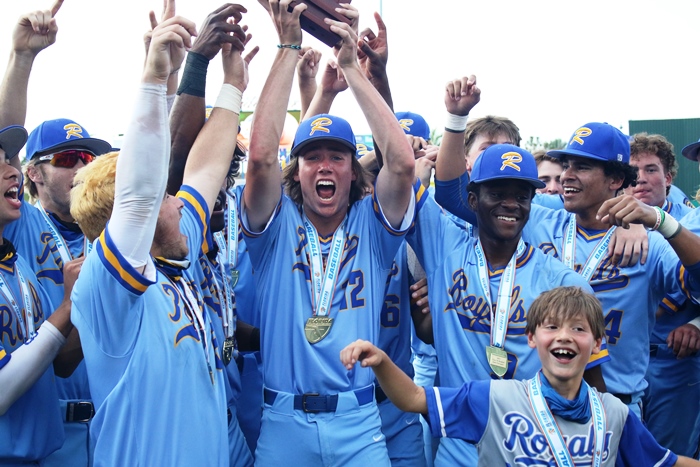 The Royals celebrate with the coveted state championship trophy now in hand.

“I knew we had to get something started. So I saw a fastball and I hit it,” Kelly said. “I was able to watch the first two, and then I saw it. The perfect pitch was right there.”

Matthew Perez then laid down a sacrifice bunt that hugged the first base line, and he reached on a throwing error that put runners on the corners after the fielder picked it up and attempted to make the out at first.

“The first two pitches, I wasn’t really comfortable with it,” Perez said. “Coach took the sign off, but I just trusted myself to get it down. No matter with two strikes, I was going to get it down.”

Perez swiped second, and a ground ball from Greg Pettay was misplayed to push Kelly home, and Perez also crossed the plate due to an interference call. Pettay then came in off another infield error to complete the scoring.

Both sides had numerous chances to crack the scoreboard earlier. But each team repeatedly came up with the plays to hold the rope in the tug-of-war for the title. 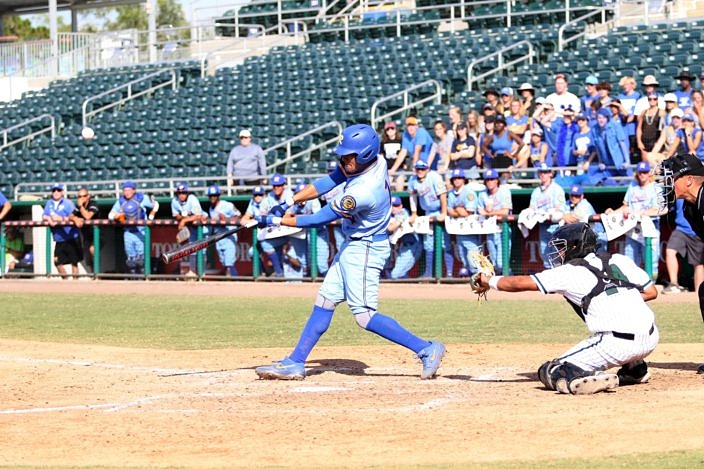 The Royals ignited the offense and their fan base when Riley Parker led off the top of the second inning by crushing a 2-1 offering deep to the left field corner for a stand-up, lead-off double. Nathan Seeber then worked a walk to increase the pressure, and a sacrifice bunt from Tyler Hopkins moved them both into scoring position.

While the Warriors responded by tracking down a foul pop, followed by an unassisted putout at first base that ended the inning and erased the threat, the First Academy faithful in the stands were already driven into a frenzy that helped fuel the team through this playoff run.

“That was definitely a big factor in us winning, because if they weren’t there than maybe our energy wasn’t going to be there. But them being there was probably one of the biggest factors in us winning,” Pettay said.

First Academy threatened again in the fourth when Kelly singled with one out, prompting the Warriors to go to the bullpen for side-armer Christian Mejia. The move paid off, as the defense got an infield grounder and converted it into a 6-4-3 double play that ended the inning.

In the bottom of the fifth, Allen Jorge lined a single to right field and then moved into scoring position thanks to a well-executed sacrifice bunt from Christian Bosque. But the Royals got a fly ball to center, followed by a swinging strikeout, that held the rope. 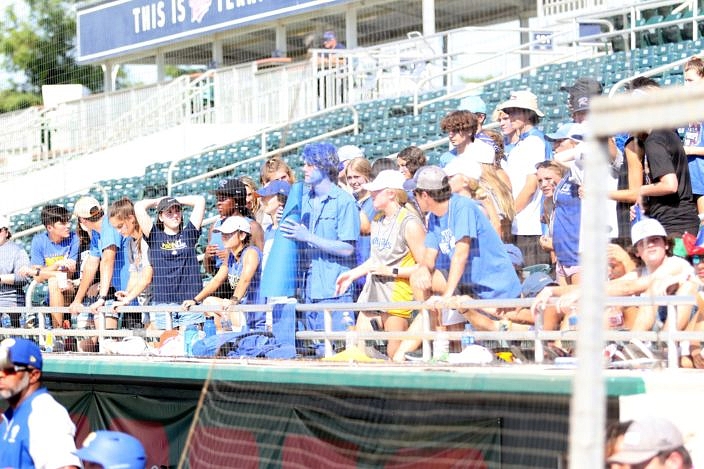 “These guys work extremely hard,” Grove said. “Most of them are committed to college. Sometimes that’s not always a good thing for a high school coach, just because they get complacent. I would never see this with this group; they are just always trying to get better.”

An inning later, the Royals again threatened to break the game open. Ben Barrett was plunked by a pitch to start off the top of the sixth with a base runner for the Royals. A pitch in the dirt allowed Barrett to get into scoring position, and a sacrifice bunt from Riley Parker moved him to third. An infield grounder to first base was then followed by a routine fly ball to right field that got the Warriors out of the frame unscathed.

Then it was First Academy’s turn to hold the rope. Sal Stewart started it off by working a walk to begin the bottom of the sixth, and Rene Ramirez dropped down a bunt base hit to put two runners on base. A fielder’s choice erased the runner at second, and a comebacker to the mound was easily converted for the third out to keep Westminster Christian off of the scoreboard. 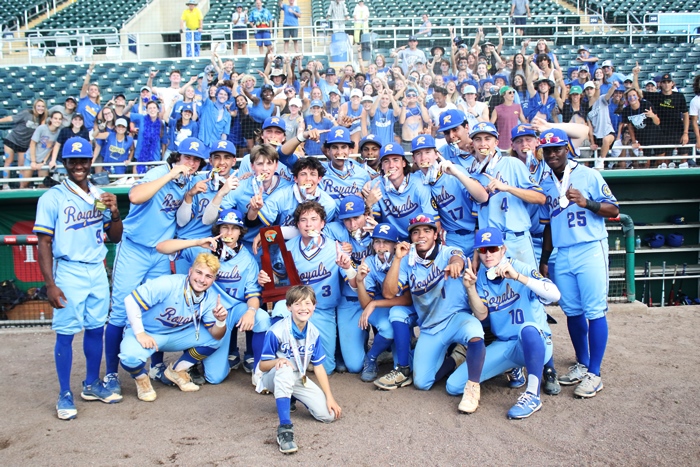 The Royals then went to work in the seventh to take the lead and climb into the driver’s seat to victory. One inning later, it was all over and they were state champions.

“It’s great for the school,” Grove said. “You can tell how close-knit our school is, being a smaller, private school and the turnout that we got for these last two games. I think it is huge, not only for our players on the baseball team, but our whole athletic department, as well as the school. It’s just a real exciting time for The First Academy.”

Coach Grove has a special relationship with his players, his program and his school. He bleeds their school colors and loves his players like they are his own children. While Tuesday’s accomplishment completes the ultimate goal, the ultimate reward has come in the journey together.

“It really is a passion, and the team just means everything to me,” Grove said. “We spend more time together throughout the year than we do our own families. You just get to know each one of their personalities, and the way they tick and what can motivate them. I hope they feel the same about me, but I would do anything for them. The biggest thing in high school baseball isn’t winning a state championship; it’s not all about the wins and losses. It’s making an impact on people, so that when they have kids and get married they can be a quality husband and a quality dad. I hope that I set the example for them. Once you are involved with me as a coach, you will always be part of my family.”