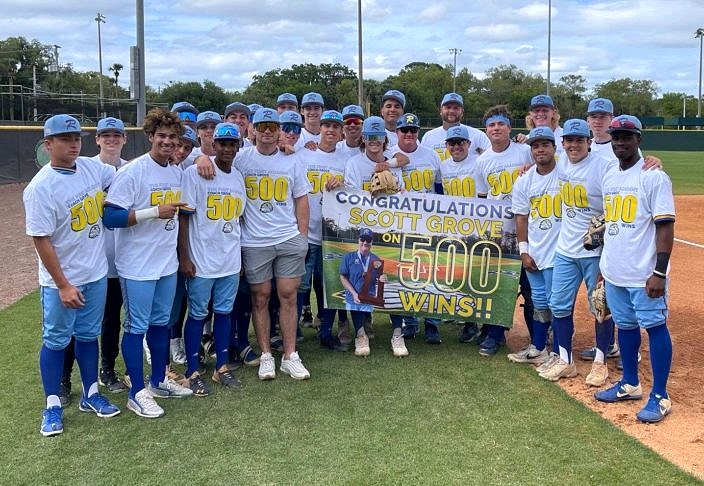 It was celebration time once again on Monday for The First Academy Royals, as Manager Scott Grove earned his 500th career coaching victory. The defending Class 3A state champions defeated the Olympia Titans 7-2 in the opening game of the “The Classic” Florida League Invitational tournament in Sanford.

“It’s unbelievable the amount of talent that I’ve had throughout my career, and it’s great seeing so many kids go on to play at the next level. Winning 500 really means that you’ve been in the business for a long time,” Grove said. “The thing that we really preach is to playing the game the right way. It is good to have fun but we don’t want to get to the point that we do anything that doesn’t show class to the game or the school, and they really understand that line. So again, we have a lot of fun, but we play the game the right way. We work extremely hard at doing the little things right so the big things take care of themselves.”

The Royals (8-0) wasted no time in adding number 501 with a convincing 15-5 win over the Ponte Vedra Sharks on Tuesday. First Academy has won 30 straight games dating back to last season, its last loss coming exactly a year ago on March 13, 2021 in a 5-4 defeat to the Bishop Moore Hornets. 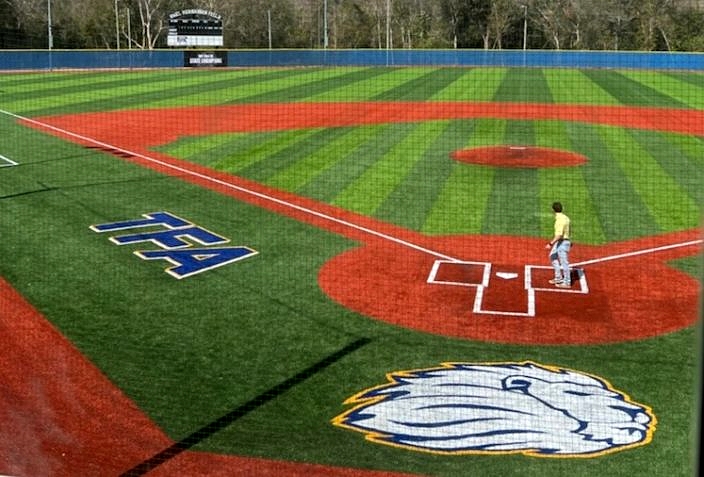 The Royals now enjoy an immaculate new turf field as part of the recent improvements thanks to a donation.

“It’s been really great and I’m really blessed to have this team be the team to get me the 500th win,” Grove said. “We’re on a 30-game winning streak and we had such a great year last year. It’s been so much fun with so many of the kids returning from our state-championship team last year. So we’re just going to continue to get better every day, and it is a lot of pressure when everybody expects you to win all the time. Baseball is such a funny game. You just need to run into one buzz saw and that ends everything. We realize that and we just want to continue to build on what we’ve done and build for the future. Hopefully we can make a run when it’s most important at the end of the season.”

The program also enjoyed an extra reward this year when a large donation helped fund multiple improvements to the baseball facility. This included a new turf playing field, an impressive new clubhouse and a state-of-the-art new lighting system. There is a ton of buzz around the program, and the Royals continue to generate their own good mojo with their work ethic and positive energy.

“It sure does help when you truly enjoy being around the kids. They love each other, and they are really close-knit. Everybody says that when you have a pretty good, but boy, they do everything together,” Grove said. “You saw how our school rallies around them when they made that three-hour bus trip to Fort Myers last year, and every home game it is packed. So it has been a lot of fun and the kids really feed off of the excitement from our student-base and our administration-base. It has just been a total fun ride ever since we started the win streak last year.”